I am going to write to simply help others who might be experiencing the same behaviors with their children.
Many who read this will think I am absolutely nuts. That’s okay this is my experience and my child.
Paul’s behavior has been crazy, unpredictable, annoying, unemotional, untouched for several years. It has gotten worse as he has gotten older. Actually, maybe not worse but different.

So of course, I could have easily took him and got a diagnosis and medication. But I felt there was more to this story than I was seeing.

Being the google obsessed mother that I am, I found the Feingold diet. We did it and I found that something was causing some difference in behavior. But I couldn’t pinpoint it.

So a few months later…behavior is still at its worse and someone tells me you crave what you are allergic too. Hmm…interesting. But my thoughts first go right to Paul and think the only ‘food’, he loved was apple juice.
Now I should have stopped and realized how much he really loved apple juice. Like the time I went to the store, Chloe was babysitting and he drank a half gallon of apple juice. Or the time I caught him up at 3am drinking a tall glass of apple juice. Or that apple juice was the very first thing he asked for every.single.morning.

So in November I started thinking…could it be apple juice? So I googled ‘apple juice hyperactivity’. CAN WE SAY WHAT??? THIS MAKES ME ANGRY!!!! I have told my doctor over and over, I was worried about the amount of apple juice he wanted to consume. My doctor always said, “As long as it’s 100% juice and he is cleaning his teeth, its fine.” Okay….not so much. Hundreds of website talk about the concentration of ascorbic acid in apple juice and how it cause ADHD, ADD, Hyperactivity…among other things. This is crazy! Why isn’t this out there?????

In the beginning of November, I took Paul off of apple juice…cold turkey. The first morning, he said please can I have apple juice? I said no but you may have an apple. That morning Paul ate 4 apples, again I don’t usually let him eat 4 apples or even 4 glasses of juice a day, but I was seeing his reaction. And yes he was CRAVING, that apple juice feeling. The apples wouldn’t affect him this way because the ascorbic acid isn’t as concentrated in an apple as it is in apple juice. He drank some 100% cranberry juice that day.

Fast forward 5-6 weeks later, I start noticing this sweet, calmer, emotional, LOVING, tenderhearted little boy, which I have been missing out on. He is so sweet! I am sad I didn’t catch this sooner.
I went to our homeschool co-op and started sharing what I tested at home and found out. I always start this conversation with, don’t think I am crazy but here is what I think was wrong with Paul. Three other moms were in the preschool room with me that morning, two of the moms said, “Did you see the Dr. Oz about the arsenic levels in apple juice. WHAT?????? This is crazy!!

Again, confirming my mommy instincts to not medicate and find what is the problem. And boy I am thankful… 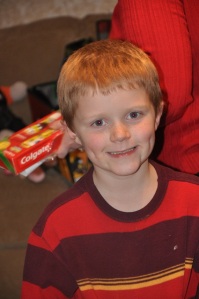 I am happy to say my precious little 6 years old is BACK!!! And we are enjoying him.:)
www.consumerreports.org/cro/2012/01/arsenic-in…juice/index.htm
www.doctoroz.com/videos/arsenic-apple-juice
I would like to say that this is what works for my child. Obviously, some children do need medication. I have just always felt it wasn’t our answer.

4 thoughts on “Did Apple Juice Cause This?”